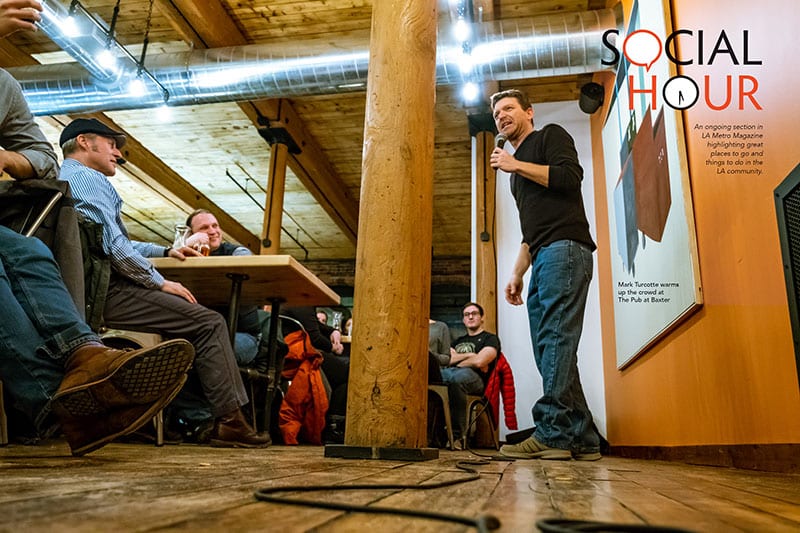 As Lewiston Auburn’s once-thriving downtown is seeing expansion, entertainment – like music and comedy shows – is once again emerging as a growth enterprise.

A driving force for the burgeoning LA comedy scene is Mark Turcotte (pictured above). Stand-up

comedian Turcotte founded Maine Event Comedy, described on its website as “a vehicle to showcase some of the best comedians from the Pine Tree State and beyond.” “I didn’t start out in comedy with the intention of producing shows, but I’m glad it worked out,” Turcotte admits. “I enjoy the process of working with venue owners and building an audience. It’s also fun to put comedians in a position to succeed and see them make the most of an opportunity.”

The origin of Turcotte’s love for comedy was a George Carlin special he watched on Home Box Office at age 12. “What resonated was that single person onstage, armed only with a microphone, making people laugh,” recounts Turcotte. “It was entertainment in its purest form…I couldn’t wait to try it. Little did I know, it would take 30 years.”

Turcotte only began to pursue his early love of comedy later in life. “I saw a commercial for a stand-up workshop, and it was all I needed,” explains Turcotte. “Five minutes into the workshop and I knew…I found my people, my creative outlet, my purpose. It’s been nothing but writing, performing, and producing ever since.”

Something out of nothing “The biggest change from when I started is that now, there ‘is’ an LA comedy scene,” jokes Turcotte. “When I started six years ago, there were no opportunities here. You had to go to Portland or beyond for open mics, workshops, and shows; now we have all of that in Lewiston Auburn. It’s exciting,” muses Turcotte.

Turcotte proffers options for comedians who wish to start out performing for an audience. “I offer an open mic following the shows at Bear Bones Beer. Some comedian friends started an open mic at 84 Court that runs twice-monthly. And I hear comedians are even doing time Monday nights at Pedro O’Hara’s open mic,” states Turcotte. “I’ve also offered some workshops through Maine Event Comedy, and now you can take stand-up, joke writing, and improv courses through Lewiston Adult Education.”

A class in comedy

Local comic Dawn Hartill has also been party to the rising popularity of comedy in LA.

“I took a stand-up comedy class in 2016 at Lewiston Adult Education with Tuck Tucker, and I took over teaching the class in 2018,” Hartill explains. “Several individuals from the class I taught have gone on to exceed all expectations in comedy. Leonard Kimble and Nic Dufault both made the semi-finals in two comedy competitions last year.”

Turcotte singled out Julie Poulin, another one of Hartill’s students, as a rising star in the LA comic scene. “Julie is approaching her one-year stand-up anniversary, but handles herself like a seasoned veteran,” Turcotte says. “With a background in theater and improv, she already had stage chops, but stand-up is a different animal. She’s embraced the discomfort of being alone onstage, and her performance seems to improve by the week.”

Turcotte highlights Poulin’s comic ascension with a milestone achievement. “She recently bested a field of 20 in Maine Event Comedy’s Tightest Five contest,” proclaimed Turcotte. “We had comics from all over New England performing their best five-
minute set; Julie delivered the set of her life, and won.” After years as a stand-up comedian in New York City, Mike St. Hilaire recently returned to his home state of Maine. “When I left Lewiston back in ‘94, comedy didn’t really exist,” admits St. Hilaire. “Now there is a real comedy community – funny comics, comedy workshops and open mics, and comedy shows!”

“I’ve heard lot of comics in New York say that the best way to really get good is to find a smaller community, then come to New York,” says St. Hilaire. Conversely, he began developing his routines in New York.

“My stepbrother, Ben Roberts, is a comic who lives in Leeds, and has a pretty good pulse on the Maine comedy community. He told me there is some real comedy happening in Lewiston Auburn, and a lot of surrounding towns. He himself put together a few open mics and some real showcases right here in LA. I guess no matter where you are, people want to laugh.” “After running a series of fundraising shows at Auburn’s Fireside Inn, I wanted to branch out a bit and see if stand-up would work in other places in LA,” Turcotte recalls, outlining the germination of Maine Event Comedy. “In 2015, I purchased a solid sound system, a few lights, and produced shows wherever there was a venue owner willing to give me a shot,” says Turcotte.

Turcotte hosted Maine Event Comedy events at Elks lodges, restaurant banquet rooms, art galleries, hotels, and ski areas. “In just a couple short years, Maine Event Comedy has grown from a one-venue operation to something I can barely control,” quipped Turcotte. “Since then, I’ve formed some great relationships and have the good fortune of producing shows at some of the best venues in the state.”

“It’s also fun to put comedians in a position to succeed, and see them make the most of an opportunity,” adds Turcotte. “Each venue has its own ‘personality’ and I try to book comedians that will be a good fit. I like to meet audience members before or after the show. I encourage them to provide feedback, which helps me design shows and select lineups for certain venues.” Will the popular comedy scene continue to flourish?

“Judging by the messages I receive on a weekly basis, and the attendance I’ve seen at open mics, shows, and workshops, there’s no doubt in my mind,” Turcotte states. “Lewiston Auburn is building a reputation as a comedy community, and I’m thrilled to be part of it.”

Hartill is also optimistic about the future of comedy in LA, and the comedians she has fostered. “I think the recent growth of comic opportunities is definitely sustainable, for years to come. Everyone loves to laugh, and live entertainment is a welcome addition to the LA area.”

“I think the impact on the community has been nothing but positive,” asserts Turcotte. “People seem to be thrilled with more live entertainment options.”

“The primary goal of comedy is to make you leave in a better mood than you arrived,” he observes. Who isn’t looking for that? Join Us For A Night Of Laughs 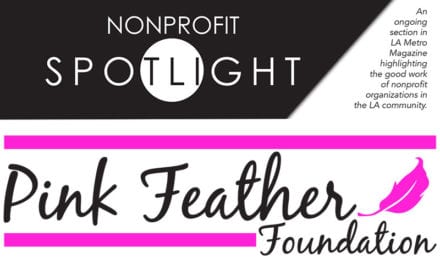 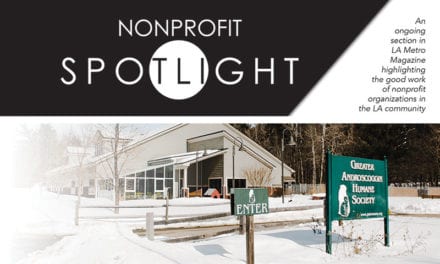 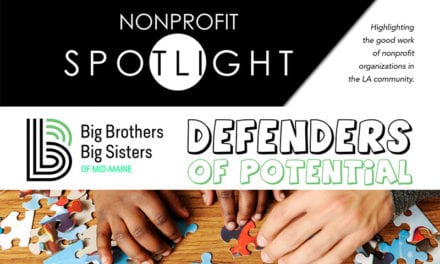