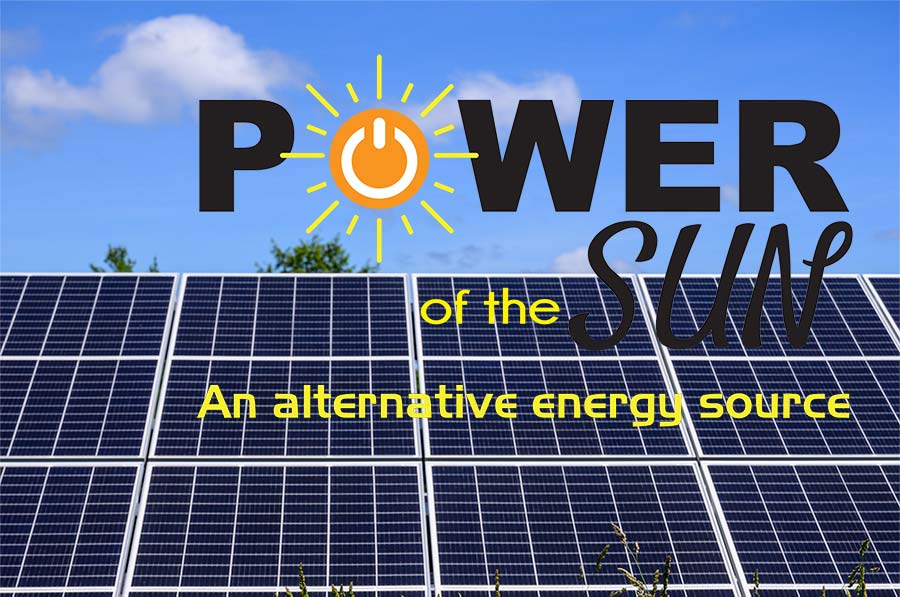 Society can benefit greatly from the ways solar energy can be co-opted and implemented. Growing concerns over expenses and environmental detriments of our current energy systems are prompting further discussions into the power of the sun. Electricity prices are rising, and the community is looking for ways to cut costs without negatively affecting the environment. Utilizing solar power in effective ways is increasingly becoming an attractive proposition for homes and businesses. 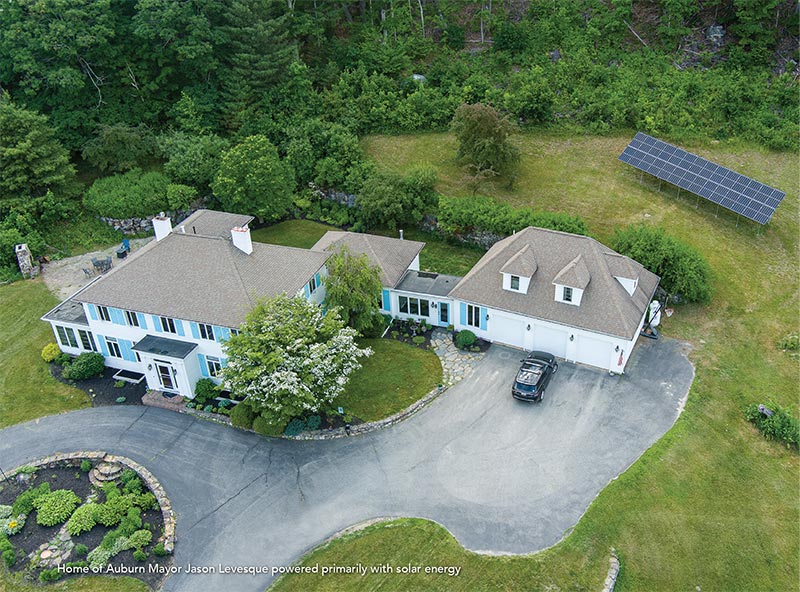 Over time, the myriad positive aspects of converting to solar power outweigh the disadvantages. Technology for solar systems are improving, with more efficiency at a smaller size, and it is advantageous for consumers to explore options for their energy consumption. For example, Jason Levesque, elected mayor of Auburn in 2017, runs his home primarily on solar energy.

“My main motivator in setting up a whole-house, grid-tied solar system was the desire to have an alternative/diverse utility supply, with the ability to fix my rates for the next 25 years,” says Levesque. “Removing thousands of tons of carbon from the air also factored into my decision-making process.”

Solar energy is partially subsidized with credits from the government, and the extra energy absorbed at peak sunlight times can be sold back to the grid provider. Also, no greenhouse gases are emitted during solar production.

John Blais is the Deputy Director of Planning and Permitting for the city of Auburn and an ardent advocate of solar energy. Blais points out that on the city grid, there are variable charges when energy is at higher usage times.

“The biggest benefit with solar power is the opportunity to reduce the peak demand charges for businesses,” maintains Blais. “Solar power use flattens out the variable usage cost – yielding a more predictable electric bill.” 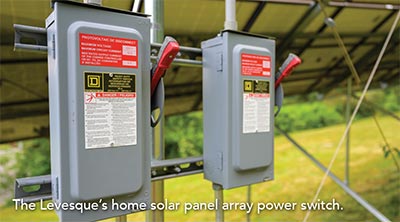 The Public Utilities Commission negotiates a standard supply price for a grid-tied solar system. Using solar power in conjunction with a local supplier allows the customer to lock in a rate, making their electric costs less nebulous.

According to Blais and Levesque, the present method of solar energy supplementing a grid-tied system is like an insurance policy against rate increases.

“It’s satisfying to know that our family finances are protected from utility price increases,” affirms Levesque. “My electric bill right now is around $10 to $15 per month.”

Mitigating energy usage on the grid at peak times with a solar-powered supplement is a boon for the individual and the community.

“I will say that as more folks add grid-tied solar to their personal properties, our regions’ ability to handle peak demand times becomes significantly better which will help lower our reliance on large gas or oil standby power plants,” affirms Levesque. “That’s a huge win for everyone’s budget – even if you don’t have solar – and the environment.” 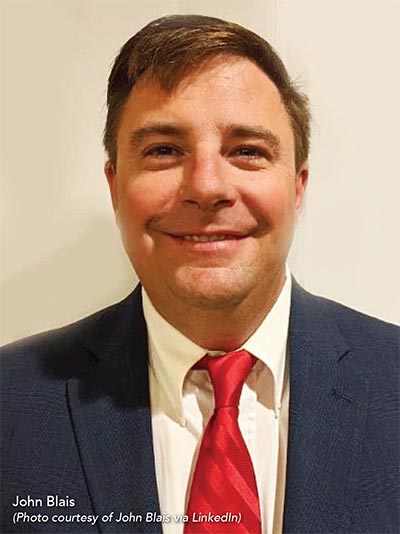 There are many ways to have solar systems incorporated into homes and businesses. Photovoltaic and thermal double-evacuated tube systems are two of the most common, according to Blais. In a thermal system, water is pre-heated by the sun through pressurized, condensed lines and stored in a collector. The process heats the water from 50 to 90 degrees, thereby reducing the British Thermal Units (BTU) required to raise the temperature to 120 degrees for home or business use. EfficiencyMaine.com lists the advantages of heating hot water with solar systems: lower cost, reduced environmental impact, and no combustion required.

“A great example of how a solar thermal system is beneficial is when used by dairy farms,” Blais illustrates. “These farms are constantly cleaning their milking lines, using lots of hot water, and the efficiency of solar power really comes into play.”

Having electricity provided using solar cells can be as simple as powering a few appliances or be more all-inclusive; the energy use will be the primary cost determinant.

“Photovoltaic (PV) costs range all over the board, and cost varies on the power requirements you have in your home,” Blais agrees. “Heat pumps, dryers, dishwashers, electric pumps for wells all require a great deal of electricity.”

“The prices vary based on whether it’s a roof-mounted or preferably a ground-mounted system, how much generation you’re looking for, and whether you want batteries,” adds Levesque.

For costs, Blais suggests shopping around the various companies that sell photovoltaic cells as well as asking Efficiency Maine what credits might be available.

Businesses can also be augmented positively by solar energy, and the city of Auburn has the infrastructure to support vast new fields for solar collection.

“There is 19,000 acres of agriculturally-zoned land in Auburn that could possibly be partially used to host photovoltaic cells,” says Blais.

Farmland can be leased – and the brunt of development expenditures can be shouldered – by the solar companies.

“Solar power is an income opportunity for landowners, particularly in the agricultural field,” reports Blais. “Clearing the land may be out of the range of a farmer’s finances, but a solar company can bear the expense of preparing the land for solar cells.”

Although a huge windfall for the landowner, there can be problems from neighbors.

“Farm fields being converted to solar fields can seem like a loss to the environment,” notes Blais. “Angle of solar panels, creating glare, is another potential complaint.”

Blais would argue the detriments of solar development are overshadowed by the preservation of critical land.

“There is a symbiotic relationship between farmland and solar power,” Blais asserts. “As land is allotted for solar cells, and the technology improves, the footprint of the cells becomes smaller and the area can be repurposed as farmland.” 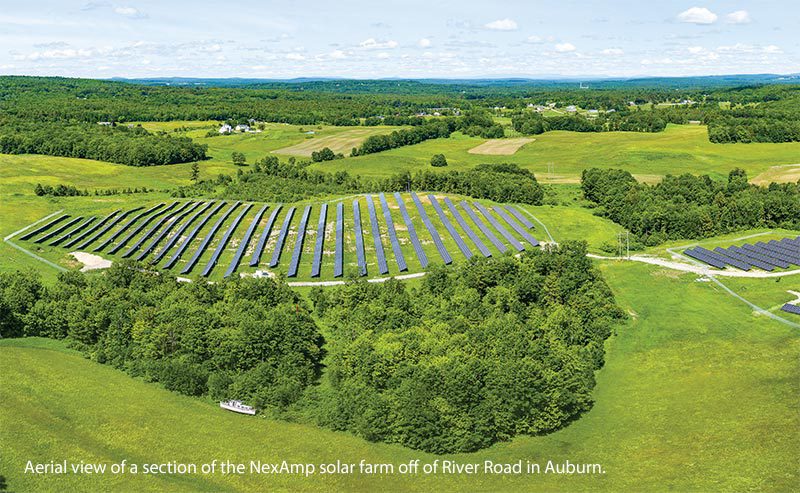 Many consumers are concerned with the seemingly prohibitive expense of solar systems. Blais and Levesque both agree the startup costs are high, but the yields are worth the investment.

“Our provider gave us two options, a fixed low interest loan or cash up front,” says Levesque. “It wasn’t cheap, but after doing a simple return-on-investment calculation, my system – with a minimum projected 25-year lifespan – would pay for itself within 9.5 years.”

With the increased cost of the fossil fuel-based energy supply, a solar-powered system is an even more propitious prospect. “Now, since rates have increased substantially, my return on investment is about six years,” confirms Levesque.

There is also minimal upkeep required with a solar-powered system.

“As far as maintenance goes, there are no moving parts so nothing to break or lubricate… they are just there doing work,” says Levesque. “Rain cleans them off nicely!”

Folks often wonder how a system reliant on sunshine is feasible during nighttime and when direct sunlight is obscured. However, when using solar power on the Central Maine Power (CMP) lines, their excess energy production created on sunny days reverts back to the customer as credits.

“With a grid-tied system, I’m always pulling from CMP on cloudy days, and at night time,” Levesque admits. “So when it’s cloudy, I pay for my power, but when it’s sunny, I get paid for the power that goes back into the grid.”

Levesque is aware of the limitations of access to the sun and considers this.

“We are thoughtful on what we use – no washer and dryer, etc. – and when the sun comes back out, my system recharges quickly,” says Levesque. “My backup battery bank will keep the house going for 18 hours at full load and consumption.”

Levesque’s system benefits not only his family, but the other customers to which he is connected.

“I am a mini power plant for CMP, and that’s important in peak summer demand,” Levesque states.

The permitting process for commercial and residential solar energy conversions involves a site plan review for commercial development, where a customer must comply with a series of ordinances. Residential conversion requires an electrical permit with a net metering agreement with CMP. The city addresses glare and potential issues with neighbors, yet the city planning board feels optimistic about expanding solar-powered systems within Auburn.

The largest solar project the board has approved since Blais’ tenure is at 1115 Riverside Drive for Auburn Renewables/NexAmp, amounting to 35 acres. Auburn Solar, LLC/Hexagon Solar at 1054 North River Road purchased 18 acres for solar energy fields. Penley Corner Solar and Novel Energy Solutions also had significant amounts of land earmarked for solar development. In total, 91.76 acres have been rubber-stamped for solar use. The City Planning Board can add up to 200 acres without the council’s approval.

“The current national average in the United States was estimated to be 164 homes that could be powered by one megawatt of solar energy,” Blais instructs. “Auburn has approved 17 megawatts of commercial solar projects so far, which equates to enough electricity to power 2,788 homes – 27% of the homes in the city.”

The future will hold more and more solar projects being green-lit by the board. Hydroelectric power and other alternative energy sources are also being explored.

Maine residents can choose to have electricity supplied through a community solar farm and either buy or lease a portion of the solar panels in the solar farm’s array, and receive an electric bill credit for electricity generated by their share. Community solar is an option for people who don’t own their own homes, have insufficient solar resources or roof conditions to support a photovoltaic system, or are unable to make it work financially.

“The biggest benefit is zero investment from the individual homeowner,” says Blais, who subscribes to a community solar farm. “Plus, knowing where your energy is coming from makes people feel good – that’s why I do it.”

Solar power is less expensive than electricity generated via fossil fuels, so consumers save on their monthly bills. 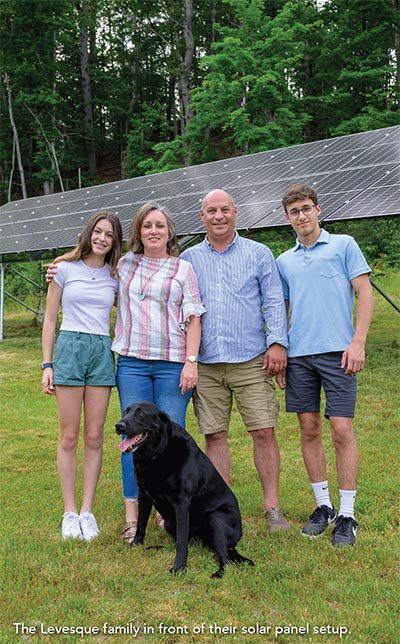 Through community solar farms and harnessing the power of the sun directly, more and more of the citizenry of LA can limit their dependence on oil and gas and make a positive contribution to the environment and community. Levesque, with the foresight and financial resources, has reaped the rewards of a solar energy system.

“I have been watching the technology advance while the price decreased; in 2019, the financial model really started to make sense for residents and businesses alike,” says Levesque. “Electricity rates fixed at current prices, and the ability to generate and store back up power, create a solid business model – more resilient to outside variables.”

As prices for energy rise, the mayor entreats the community of LA to check out options for renewable power sources.

“I would encourage every home, apartment building, and business to explore the idea of adding some, even a small amount, of solar generation and storage infrastructure,” suggests Levesque. “It could be a couple of roof-mounted panels and small battery backup that will allow you to keep the food in your freezer frozen and the furnace on – pretty good insurance on your major investments.”

The positive aspects, such as safety, job creation, low maintenance, limiting dependence on foreign oil, no pollution or greenhouse gas creation, and lower cost over time, are all reasons to discover what solar energy can mean for one’s home or business. 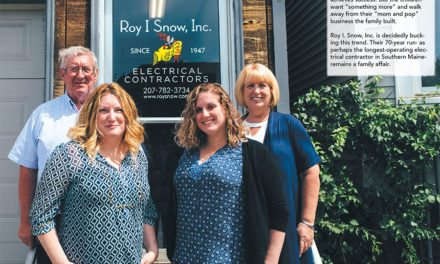 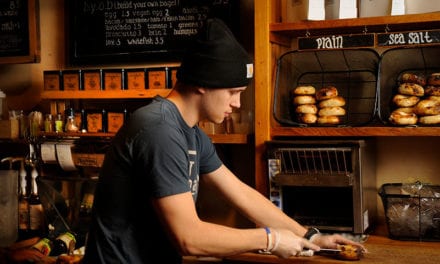 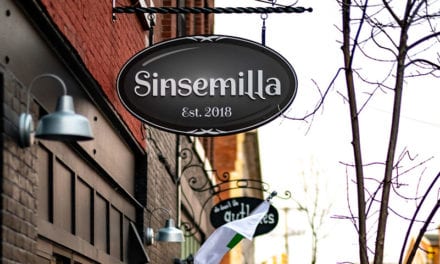